Alcides Ghiggia receives the ball from Julio Pérez and, with Uruguay attacking from right side, invades the Brazilian area and scores the goal to clinch their second World Cup title. The episode was known as "Maracanazo". After the defeat, Brazil’s white uniform was retired for fear that it would harbor bad luck. It was not until the World Cup of 1950 that the teams started using numbers on their shirts. Uruguayans have adopted the red font while Brazilians opted for blue numbers, the same colour used up until the 1966 edition of the World Cup. 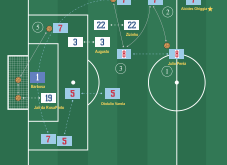