The final between West Germany and Hungary is known as the "Miracle of Bern", as the Hungarians were unbeatable at that time. The secret, besides the quality of the players, was the Hungarians’ warm-up before matches, an unprecedented practice until then. Puska’s team opened with a 2-0 score. But the Germans turned the tide against the Hungarians when Helmut Rahn took advantage of a defensive breakdown and cut sharply to his left and shot straight into the right corner past goalkeeper Gyula Grosics. Hungarian invincibility was broken for four years. 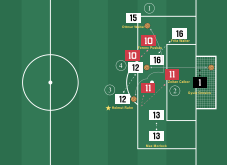