On one side, the Swedish hosts wearing yellow with a blue font ". On the other, Brazil wearing blue with a yellow font. The colour of the Brazilian shirt was hastily set on the eve of the final, because there was no backup uniform and both teams played with yellow shirts. The numbering of the Brazilian team was randomly set and stitched, and Pele was blessed with the number 10, which thereafter became a mythical number in football. Only 17 then, the King scored two goals in the final, the first one after making a beautiful volley over the opponent. Brazil was the World Champion for the first time. 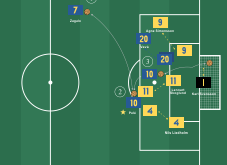