Brazil and Italy were duelling for their third world title. Both teams took the field with their traditional uniforms. Curiously enough, it is the first time Brazil wore green numbers on the back of their shirts, abandoning the traditional blue. The South American team, which charmed the world with the amazing skill of its players, scored its fourth goal after a long give-and-go. Carlos Alberto, captain of the national team, scored the final goal to make it 4-1 after receiving the ball from Pelé. 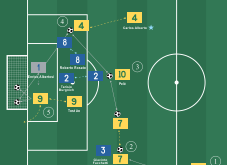