The Clockwork Orange charmed the world with its revolutionary system introduced in the 1974 World Cup. No player had a fixed position. When English referee John Taylor whistled to open the match, the Netherlands exchanged passes up to the West German penalty area, where a penalty was marked. With no German player touching the ball, the Netherlands scored to make it 1-0 when Neeskens scored on the penalty. The hosts outdid themselves, evening the match, tying the match and winning the world championship for the second time with Gerd Müller’s goal 41 minutes into the first half. The Germany striker received a low cross from the right and fired the ball across, leaving no chance for keeper Jan Jongbloed. It was at this World Cup that uniforms started to have the team number displayed (printed) on players’ shorts. 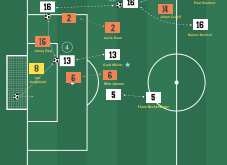