In the second phase of the 1982 World Cup, Brazil and Argentina played the Superderby of the Americas. Diego Maradona was kicked out of this match after kicking Dirceu in the midfield. All the better for the “Canary”* (Brazilian) team that won the match 3-1. The last goal was scored by Brazilian footballer Junior after an exchange of passes between Socrates, Eder and Falcão, culminating in a sharp shot from Zico. Brazil would not win the world title, but would enter the annals of sports history with its artful football at the 1982 World Cup in Spain.
* Nickname used by the brazilian team with yellow shirts, in reference to a small canary. 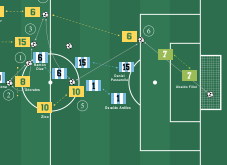