For the second time in World Cup history, the Brazilian and Italian national teams decided what would become the greatest champion in the world, then with four titles. After a goalless draw through regulation and extra time, the final match went to penalties. Baresi and Massaro missed their shots for the Italian side, one caught by Taffarel. Márcio Santos also missed the first by the Brazilians. After Albertini and Evani (ITA), Romario, Dunga and Branco (BRA) scored, playmaker Roberto Baggio had his turn. After kicking the ball over Taffarel’s goal, Brazil won a world title after expectation 24-year wait. 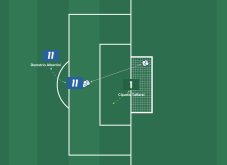