Brazil and Germany’s first clashin a World Cup came in a final match. The clash had goalkeeper Oliver Kahn, voted the best in the World, facing Ronaldo, the leading scorer in the tournament. This was to the advantage of the Brazilian striker, who took advantage of Kleberson’s good move on the right and Rivaldo’s light trap to score his second goal of the match and set the final score: 2-0, with Brazil winning its fifth world title. The “canary” team became the only one to win Cups over all continents where they’d played so far. 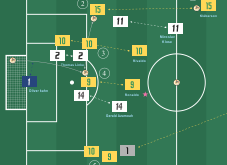