With Weber scoring in the last seconds of regulation time, West Germany scored the equalizer against the host England to take the final match of the 1966 World Cup into extra time. The game rolled on normally until Englishman Alan Ball sent in a cross from the right, Geoof Hurst swivelled and shot. The ball hit the line after exploding off the crossbar before being headed away by a German defender. After consulting with the linesman, Swiss referee Gottfried Dienst awarded the goal, sparking one of the greatest World Cup controversies to date. 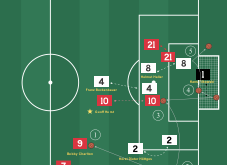