1970 Semi-final: Italy X West Germany is considered the greatest match in the history of the World Cup. Franz Beckenbauer, with a broken collarbone, played the game with his arm and shoulder immobilized. The Germans were behind 3-2 in extra time when Gerd Müller tied the game at the 5-minute mark of the second half. But right at the ball out, Roberto Boninsegna fired in a low cross to Gianni Rivera who slid it pastkeeper Sepp Maier, sealing the the victory for the “Azzurra” in the final against Brazil. 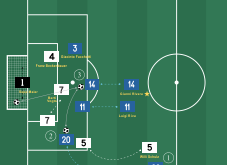