In pursuit of the dream of a second World Cup title, England and Argentina duelled each other in the quarter-finals of the 1986 World Cup in Mexico. This was to the advantage of the South American team, which advanced to the semi-finals after two historic goals from Diego Maradona. The first was scored with his hand and is known as the "Hand of God" goal, while the second is considered the most beautiful goal ever scored in a World Cup: "The Goal of the Century". The Argentinean playmaker received the ball in the Argentinian end of the pitch and proceeded to weave past all opposing defenders and the goalkeeper and hit to the back of the net. Argentina was one step closer to their second title. 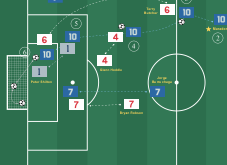