Cameroon, with Roger Milla and Colombia, with René Higuita, were in their maiden round of 16 in a World Cup. After a score of 0-0 in regulation time, 38-year-old Milla decided the match with two beautiful goals. On the second, the Colombian goalkeeper, renowned for his foot skills, tried to play the ball out, but Cameroon stole the ball and scored into an empty net, sealing Cameroon’s classification for the quarter-finals in the Italian edition of the World Cup. Pay special attention to the ball, which for the first time in a World Cup, had colourful details (blue), and to the white numbers on the shirts of the African team – whose font is usually yellow. 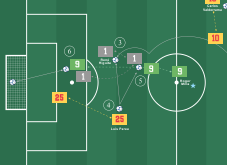