France hosted an edition of the World Cup for the second time (the first was in 1938) and played its first finals match against Brazil. The decisive 3-0 score revealed French domination over Brazil. Zinedine Zidane was the author of the first two goals for "Les Bleus", both in the first half. On the second goal, the star footballer took a corner from the left and aimed between the legs of Roberto Carlos, leaving goalkeeper Taffarel with no chance of stopping the shot whatsoever. The World Cup had a new champion after 20 years. 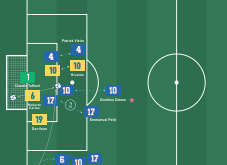