The 2010 World Cup would have an new champion. The Dutch entered the field with their traditional orange colours. The Spaniards with their backup uniform, all blue. The score remained unchanged over the first 90 minutes. When it seemed that the decision would go to penalties, with only four minutes to go in extra time, Fabregas took advantage of a rebound at the edge of the area and launched to Iniesta, who crosskicked and scored for the Spanish title. The Fury (La Furia) was about to enter a select group of world champion national teams. 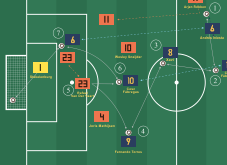